A Swedish scientist claims in a new theory that humanity has exceeded four of the nine limits for keeping the planet hospitable to modern life, while another professor told RT Earth may be seeing an impending human-made extinction of various species.

Environmental science professor Johan Rockstrom, the executive director of the Stockholm Resilience Centre in Sweden, argues that there are nine “planetary boundaries” in a new paper published in Science – and human beings have already crossed four of them.

Those nine include carbon dioxide concentrations, maintaining biodiversity at 90 percent, the use of nitrogen and phosphorous, maintaining 75 percent of original forests, aerosol emissions, stratospheric ozone depletion, ocean acidification, fresh water use and the dumping of pollutants.

“The planet has been our best friend by buffering our actions and showing its resilience,” said Rockstrom. “But for the first time ever, we might shift the planet from friend to foe.” 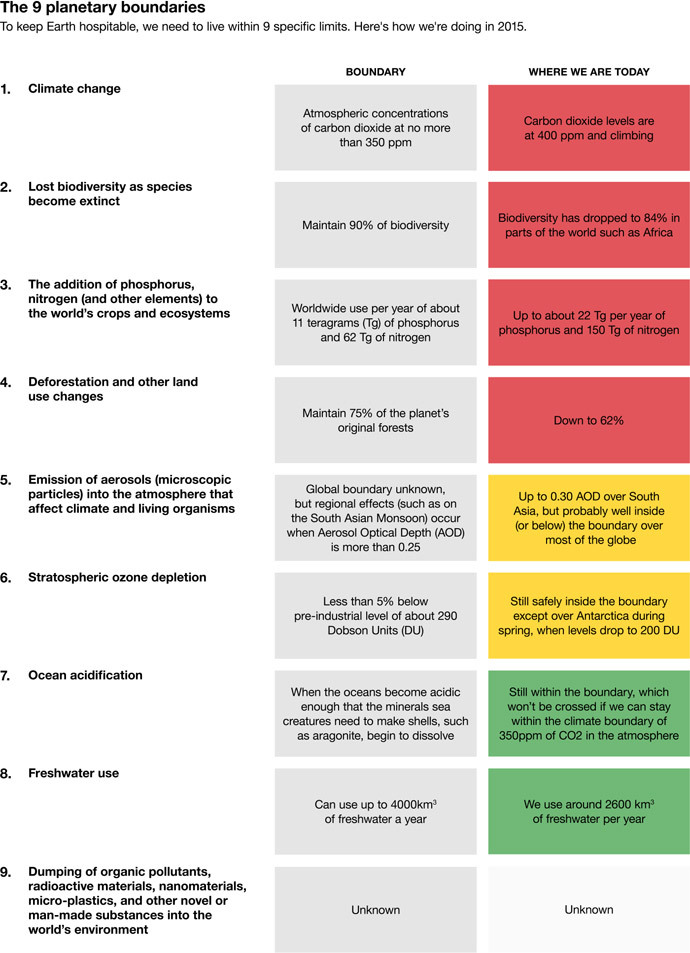 Rockstrom’s planetary boundary theory was first conceived in 2007. His new paper reveals that because of climate stability, which began when the Ice Age ended 11,000 years ago, a planetary calm helped our ancestors to cultivate wheat, domesticate animals, and launch industrial and communications revolutions. But those advances have strained the stability of the planet, and Rockstrom says we have broken four boundaries: too much nitrogen has been added to ecosystems, too many forests have been cut down, the climate is changing too quickly and species are going extinct at too great a rate.

Speaking to RT’s Ben Swann, Professor of Ethics Bron Taylor from the University of Florida said that we have accelerated the extinction crisis through deforestation and ocean acidification, a development which is driving species to extinction.

“[Human] beings have increased, even from 1925, from 2 billion – which is considered to be a sustainable population for human beings, according to northern European consumption standards – to 7.2 billion at this point,” he said.

“What we have also done is increased the number of domestic animals, the ones we eat and the ones that are companion animals. We have 4.3 domestic animals one for every two human beings on the planet. Cultivating the land they need creates species extinction because where they are, other organism are not. Where we cut down forests for cattle, other species are not there.”

“We are losing literally tens of thousands of endemic or native species to these trends.”

Professor Taylor told RT that scientists say we entering the Sixth extinction, but that this an anthropogenic extinction caused by human beings.

“If you don’t have control over something, there is no moral obligation,” said Taylor. “In this case, we are doing it. So we have to ask the question: If we are doing something that is driving species off the planet, are we in some sense morally culpable?”

“What right do we have to drive [out] other species, who got here in precisely in the same way that we have, who have participated in the long struggle for existence just as we have?”

Meanwhile, Professor Rockstrom is using his planetary boundary theory not as a doomsday message but as analysis to keep the planet “safe” for humanity. He said nations can cut their carbon emissions to almost nothing and pull the Earth back across the climate boundary.

“For the first time,” he said, “we have a framework for growth, for eradicating poverty and hunger, and for improving health.”