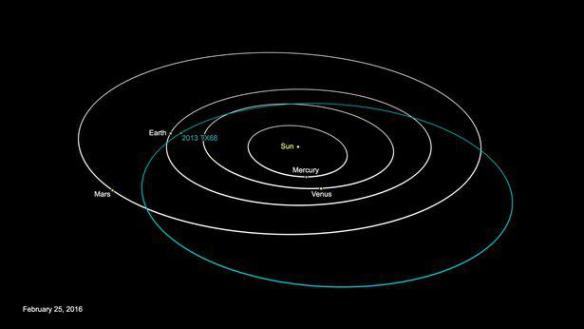 NASA has dramatically changed its mind about the risks posed by asteroid 2013 TX68 , a 100ft-wide rock which is currently heading towards Earth. It said there was “a chance” it could plough into our planet next year when it makes another flyby. However, we are glad to report that NASA thinks the odds of a collision on September 28, 2017, are “no more than 1-in-250-million”. If it did hit the planet, the asteroid would probably explode in the atmosphere, unleashing as much energy as a powerful nuclear bomb and wiping out anything unlucky enough to be beneath it. “The possibilities of collision on any of the three future flyby dates are far too small to be of any real concern,” said Paul Chodas, manager of NASA’s Center for near earth orbit studies . “I fully expect any future observations to reduce the probability even more.”  END_OF_DOCUMENT_TOKEN_TO_BE_REPLACED This is looking from the rear camera so looking west. More west of the sun is seen in the morning where the objects rise first. On the second day, planets are seen with the Nibiru.  END_OF_DOCUMENT_TOKEN_TO_BE_REPLACED

There’s some debate over just how many planets our solar system has because Pluto never gets a break. But the argument is about to get a lot weirder with the announcement of a potential new planet circling the sun. Meet Planet Nine, the planet we didn’t know existed.  END_OF_DOCUMENT_TOKEN_TO_BE_REPLACED Have you ever heard about the possibility of another planet moving through our solar system? The Authentic Enlightenment team has had the chance to interview two leading researchers on the Planet X(Nibiru) subject and what we found was astonishing. There’s more to it than just a planet. Secret black budgets, underground bunkers for the elites. What do you think is going on?

Below are the two interviews we conducted, one with Marshall Master and one with Bob Fletcher. Both of them are well worth the listen and we urge you to do so and give us some feedback. Enjoy!

END_OF_DOCUMENT_TOKEN_TO_BE_REPLACED According to new calculations by scientists in Spain and the UK, there could possibly be two planets beyond the planet Pluto. Recently the Authentic Enlightenment team interviewed researcher Bob Fletcher and from his studies he believes that this could be true, and could possibly be Nibiru (Planet X). Below you will find the entire interview, in which we found rather interesting to say the least. If Mr. Fletcher’s calculations are correct, Nibiru could start showing by the end of the year 2015. He also talks about underground cities being built from government black budgets along with seed banks and more.