Like anything that happens with the State involved, such as the events which transpired in Oregon recently, people are going to be rushing to the internet to do their own investigating. The footage released by the FBI of the road block incident which resulted in the death of militia member LaVoy Finicum can be found here.  END_OF_DOCUMENT_TOKEN_TO_BE_REPLACED 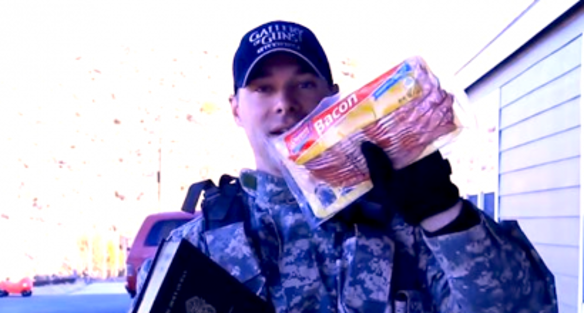 One of the results of the media ignoring the Oregon occupation (for days) is how the internet sort of took over, which is fitting because these guys were ripe for ribbing. They’re not a terribly organized bunch, so we were greeted with a wave of confusion and the internet’s thoughts on the militia’s plea for snacks. The media tried to take over coverage, but the internet held the reins and made #TarpMan a meme. PETA also smelled blood and delivered vegan jerky to the militiamen, which made the situation more absurd.  END_OF_DOCUMENT_TOKEN_TO_BE_REPLACED 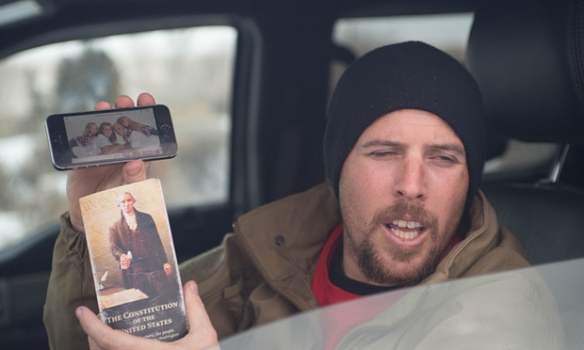 Jon Ritzheimer, a former US marine, was one of the guards posted at the gate of the Malheur wildlife reserve on Monday, and he was happy to espouse his virulent opposition to the Islamic faith.  END_OF_DOCUMENT_TOKEN_TO_BE_REPLACED 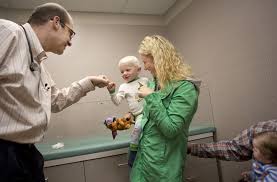 It hasn’t happened yet in Oregon, but some lawmakers want to be prepared for the day schools replace roll call with tracking devices.

The Oregon Senate passed a bill Wednesday in a 28-2 vote that would require schools to notify students, parents and the state Board of Education before integrating radio-frequency technology that would track students’ locations on campus.

The devices can be implanted into student ID cards or attached to clothing for the purpose of monitoring students’ location on campus, replacing the need to take attendance.

So far, only a few schools in Texas and California have integrated the technology.

Rep. Phil Barnhart, D-Eugene, the bill’s sponsor, said the legislation was triggered by a story he read about a Texas high school student who was suspended for refusing to wear an identification card implanted with the tracking device.

“You can certainly imagine a whole lot of very beneficial and useful reasons for being able to know where students are, but I can also think of a whole lot of difficult ones that would be a serious detriment,” Barnhart said in testimony.

Barnhart said Oregon should take action now to safeguard students’ privacy before the technology starts popping up in schools.

Amid pushback from the tech industry, lawmakers rolled back an initial proposal that would have banned schools from requiring students to wear, carry or use RFIDs to track kids.

Supporters of the devices say the technology offers a cost-effective security tool that can be used to locate students quickly in emergency situations.

“We need to know who is inside our schools at all times,” Jim Gingo, representing the Security Industry Association, wrote in testimony in May. “This is no different than asking a person to submit a state-issued ID, taking roll call at the start of class or scanning a barcode. The only difference is that (an RFID) allows all of this to be done quickly and automatically.”

Gingo said restricting the technology could close the door on innovations that would improve school security.

But opponents say the technology tramples students’ civil liberties and right to privacy.

Becky Straus of Oregon’s American Civil Liberties Union said the bill sends a clear message that the state is committed to protecting students’ privacy at school.

“This is a place where we want to teach kids that they don’t have to accept the ubiquity of these technologies,” Straus said.

As drafted, the bill would require the state Board of Education to regulate the technology as soon as the board is notified that a district intends to use the tracking devices in schools. Schools would have to give parents and students the option to opt out of wearing or carrying the tracking devices.

The bill now goes back to the House, which supported the original draft but must agree to the changes. 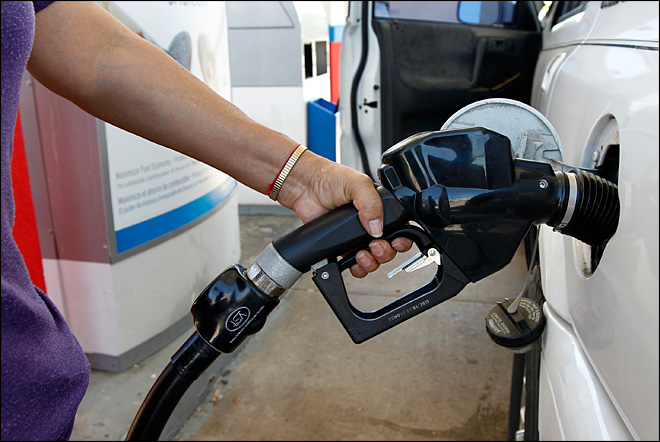 SALEM, Ore. (AP) - Oregon state officials are proposing an alternative tax for drivers who have bought efficient or electric vehicles that seldom or never stop at the gasoline pump, where government has traditionally collected money to build and fix roads.
But the auto-making industry calls the idea of mileage taxes another roadblock for its efficient vehicles, the Salem Statesman Journal reports.
In its upcoming session, the Oregon Legislature is expected to consider a bill to require drivers with a vehicle getting at least 55 miles per gallon of gasoline or its equivalent to pay a per-mile tax after 2015.
Because it raises taxes, such legislation would need approval by three-fifths votes in both the House and Senate.
The tax would be based on mileage reports that could be made in a variety of ways, such as via smartphone app or global positioning system technology. Drivers could also just pay a flat annual fee.
Lawmakers would have to decide on the rates. The proposed bill leaves that part blank.
Oregon transportation officials have been working for more than a decade to figure out how to pay for roads as cars get extra efficient with gasoline, or use batteries. Those developments upset the usual taxation scheme of charging taxes by the gallon at the gasoline pump, an approximate way of charging more for greater use of the roads.
“Everybody uses the road, and if some pay and some don’t, then that’s an unfair situation that’s got to be resolved,” said Jim Whitty of the Department of Transportation.
Other states, including Washington, have looked at per-mile charges. A Washington law that would charge electric car owners an annual fee goes into effect in February.
Opponents of the Oregon proposal say it will hurt a new industry.
“It will be one more obstacle that the industry and auto dealers will face in convincing consumers to buy these new cars,” said Paul Cosgrove, a lobbyist for the Alliance of Automobile Manufacturers.
Oregon set up a task force in 2001 and did a pilot study in 2006, which raised privacy concerns — the government could track cars as they use private roads or leave the state. Whitty said the options drivers would have in the new proposal address those concerns.
A second pilot project has involved about 50 participants, mostly state transportation officials and lawmakers. They pay 1.56 cents per mile and get a credit for any gasoline tax they paid at the pump.
Oregon Transportation Commissioner Mary Olson tracked whether she would be charged for miles on private roads by comparing results from her odometer and the GPS-based mileage reporting device.
“It was scary accurate,” she said. “I was very pleased.”
The per-mile charge wouldn’t apply to mileage on private or out-of-state roads.
A similar bill that applied to electric vehicles and plug-in hybrids didn’t make it to the House floor in 2011.
The new bill resolves uncertainties about the per-mile charge, said Rep. Vicki Berger of Salem, top Republican on the House Revenue Committee and a member of the Road User Fee Task Force,
“There’s a basic unfairness around that tax, and everyone is looking for the magic way to at least get the ball rolling on a different way of doing this, one that reconnects mileage with taxes paid,” Berger said. 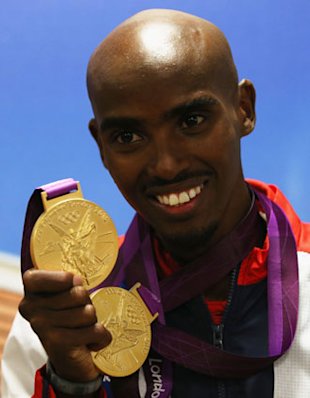 Farah, both gold medals in hand, was apparently singled out and pulled aside by officials due to his Somali origin.

MO Farah was quizzed by US customs on suspicion of being a terrorist — even though he had his two Olympic gold medals in his suitcase.

The Team GB hero, one of the world’s most famous athletes, was hauled off for questioning after border guards saw he was born in Somalia.

Because of my Somali origin I get detained every time I come through US Customs.

This time I even got my medals out to show who I am, but they wouldn’t have it.”

Startlingly, this is not the first time Farah has been accused of being a terrorist by US officials.

After leaving Portland on a travel visa and expecting to return on a more permanent residency visa that had already been given the go ahead by sports giant Nike, Farah was stopped from entering the country due to suspicion that he was a terrorist.

“We were in Portland on a tourist visa so had to leave and re-enter the country as a resident.

“So we flew to Toronto to stay for a few days, then come back in.

“But when we were there we got a letter telling us we’re under investigation as a terrorist threat and we would have to stay away for 90 days.

Only after his coach in Portland contacted a friend in the FBI was the gold medalist allowed to enter the US.

“As luck would have it Alberto has a friend who works for the FBI.

This guy happens to be a massive running fan, knew exactly who I was and got it sorted then and there.

The above display of ridiculous American police state tactics is only one small example of what has sadly become an everyday occurrence in America.

From TSA sexually harassing anyone from children to grandmothers, DHS labeling OWS as a possible terrorist group, and police around the country completely ignoring the 4 amendment, this country is slowly but surely transforming into an Orwellian police state nightmare.