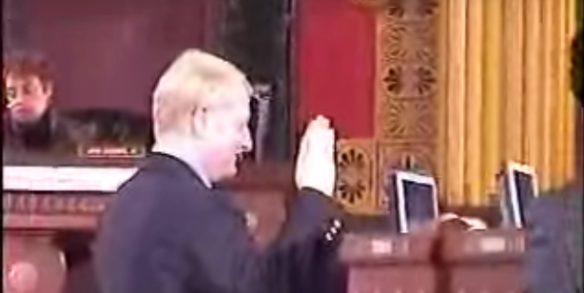 One thing in US history is consistent throughout every single election cycle — allegations of voter fraud. These allegations, however, are not the ramblings of a kook with tinfoil wrapped around his head, they are substantiated and reach as high as the Supreme Court. Don’t believe it? Ask Al Gore and George W. Bush. If you think that the ruling class would leave it up to the voters to decide who gets elected, you should think again. Every single candidate who actually challenges the status-quo becomes a target.  END_OF_DOCUMENT_TOKEN_TO_BE_REPLACED

Well the voting season is upon us. Of course right now it is only the primaries, but after hearing radio commentary and being a witness to the countless illogical and naive social media posts, along with countless articles by the lamestream media, I have decided I would do my own commentary. I do not have all day and night to be on Facebook or Twitter, and frankly I cannot understand how people have THAT much time on their hands. With that being said, I don’t even know where to start since there’s so much to all of this but I’m going to share my account with you in the shortest way possible.  END_OF_DOCUMENT_TOKEN_TO_BE_REPLACED

(CAV News) - If the headline sounds like a bad bar joke, that’s because it nearly is one. Instead, all three are being charged with voter/voting fraud.

Prosecutors in Ohio’s Hamiliton County allege that a poll worker of at least fourteen years is being charged for voting twice for herself, and several other times for relatives in various elections.

Poll worker, Melowese Richardson, could face up to 12 years in prison if convicted of illegal voting.

Russell Glossop, 75, is being charged with filing an absentee ballot on behalf of his deceased wife. I guess that would be considered an absentee ballot, literally. If he is convicted he faces up to 18 months in prison.

And finally our beloved Sister Marguerite Kloos, could face 18 months in prison for casting a ballot on behalf of a dead nun. She pleaded guilty and will cooperate.